For fans of Black Sails and Crossbones comes a new history of the Golden Age of Piracy. . .

In the early eighteenth century a number of the great pirate captains, including Edward 'Blackbeard' Teach and 'Black Sam' Bellamy, joined forces. This infamous 'Flying Gang' was more than simply a thieving band of brothers. Many of its members had come to piracy as a revolt against conditions in the merchant fleet and in the cities and plantations in the Old and New Worlds. Inspired by notions of self-government, they established a crude but distinctive form of democracy in the Bahamas, carving out their own zone of freedom in which indentured servants were released and leaders chosen or deposed by a vote. They were ultimately overcome by their archnemesis, Captain Woodes Rogers-a merchant fleet owner and former privateer - and the brief but glorious Republic of Pirates came to an end.

Meticulously researched and full of incident and adventure, The Republic of Pirates brings to life an extraordinary forgotten chapter of history. 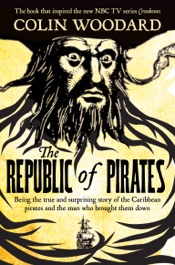