One of the world's leading geologists takes readers into Italy's Apennine Mountain Range—the Mountains of Saint Francis—on a journey to discover the fascinating secrets of the Earth's deep history.

Modern geologists, Walter Alvarez among them, showed in the last decades of the twentieth century that the history of our planet has witnessed events profoundly more dramatic than even the most spectacular chapters in human history. More violent than wars, more life altering than revolutions—understanding the geologic events that have shaped the Earth's surface is the quest and the passion of geologists. In the knowledgeable and graceful prose of Alvarez, general readers are led to explore the many mysteries that our planet guards.

The author has chosen Italy as a microcosm in which to explore this amazing past for several reasons. First, it is the land where the earliest geologists learned how to read the history of the Earth, written in nature’s rock archives. Second, it is where Alvarez and his Italian geological friends have continued to decipher the rock record, uncovering more historical episodes from the Earth’s past. And third, the lovely land of Italy is unusually rich in geological treasures and offers examples of the key processes that have created the landscapes of the entire world.

The Mountains of Saint Francis begins in Rome. We discover that the landscape of Rome was built by violent volcanic eruptions in the very recent past, almost certainly witnessed by our human ancestors. Next we travel to Siena and come face to face with a fundamental discovery of the geologists—that much of the dry land that we currently inhabit was once underwater, beneath ancient seas or oceans. Then we stop in the small medieval city of Gubbio and contemplate the amazing secret that the limestone rocks kept hidden for 65 million years—that a huge asteroid smashed into the Earth, disrupting the environment so severely that the dinosaurs, and perhaps half of the other forms of life inhabiting the Earth at the time, disappeared forever, opening the way for the rise of the mammals and eventually of humans.

The impact theory that came from those Italian limestones at Gubbio was one of the great geological discoveries of the twentieth century. Just as important to the field of geology was the theory of plate tectonics—the understanding that the outer layer of the Earth is divided into crustal plates that move around, sometimes carrying continents into collisions with one another, like the great collision between Italy and Europe that built the Alps. And yet, to explain the Mountains of Saint Francis requires something more than a collision between continents. These are mountains that are still jealously guarding the secret of their past, and in this book we go along with the geological detectives as they try to uncover that secret. It is a journey that has seen the land of Italy lifted out of the sea, squashed and folded, torn apart, left high and dry when the Mediterranean Sea evaporated away, and then flooded when the Atlantic waters poured back in.

The story of the Earth's history is fascinating in its own right, but with Alvarez as the tour guide, the journey takes on a human dimension, full of stories about the landscape and history of Italy and about the great geologists who uncovered the deep past of this land. It is a journey recounted in warm tones and subtle colors, reflecting the transcendent beauty of Italy itself. 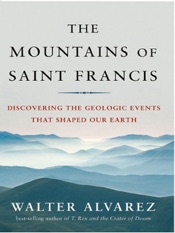