When Laurence Fife was murdered, few mourned his passing. A prominent divorce attorney with a reputation for single-minded ruthlessness on behalf of his clients, Fife was also rumored to be a dedicated philanderer. Plenty of people in the picturesque southern California town of Santa Teresa had a reason to want him dead. Including, thought the cops, his young and beautiful wife, Nikki. With motive, access, and opportunity, Nikki was their number-one suspect. The jury thought so, too.

Eight years later and out on parole, Niki Fife hires Kinsey Millhone to find out who really killed her late husband.

A trail that is eight years cold. A trail that reaches out to enfold a bitter, wealthy, and foul-mouthed old woman and a young boy, born deaf, whose memory cannot be trusted. A trail that leads to a lawyer defensively loyal to a dead partner--and disarmingly attractive to Millhone; to an ex-wife, brave, lucid, lovely--and still angry over Fife's betrayal of her; to a not-so-young secretary with too high a salary for too few skills--and too many debts left owing: The trail twists to include them all, with Millhone following every turn until it finally twists back on itself and she finds herself face-to-face with a killer cunning enough to get away with murder. 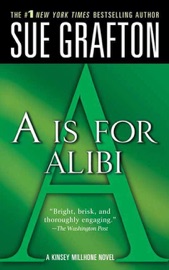