A vivid, multi-faceted portrait of feudal Japan and the legendary samurai who wrote the classic martial arts text The Book of Five Rings

Born in 1584, Miyamoto Musashi was the legendary samurai known throughout the world as a master swordsman, spiritual seeker, and author of the classic book on strategy, The Book of Five Rings. Over 350 years after his death, Musashi and his legacy still fascinate readers worldwide, inspiring artists, authors, and filmmakers.

In The Lone Samurai, respected translator and expert on samurai culture William Scott Wilson presents both a vivid account of a fascinating period in feudal Japan and a portrait of the courageous, iconoclastic samurai who wrestled with philosophical and spiritual ideas that are as relevant today as they were in his time. For Musashi, the way of the martial arts was about mastery of the mind rather than simply technical prowess—and it is this path to mastery that is the core teaching in his Book of Five Rings. This special volume includes supplemental material on Musashi’s legacy as a martial arts icon, his impact on literature and film, and the influence of his Book of Five Rings. 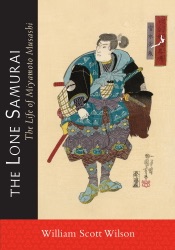